Free shipping in Germany from 50,-€ 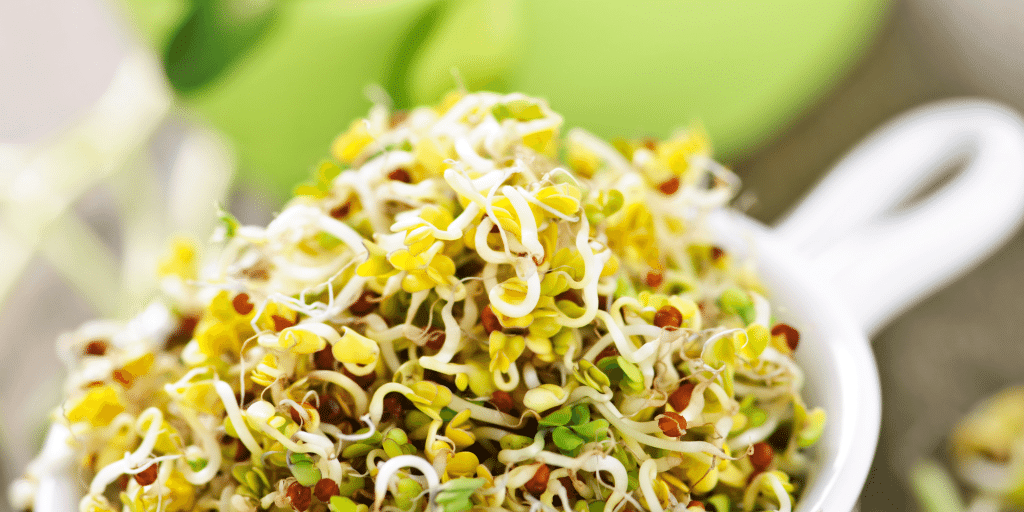 Everything begins with the seed or the germ seed. The germ is given by Mother Nature in the seed and as soon as the germination process begins, a seedling emerges from the germ. This bores out of the shell of the seed and leaves behind a (germ) root and the seed coat - all of which has now created the shoot or also germ shoot!

Towards the end of the germination period (or if you forget the sprouts on the windowsill 😉 ) it can also happen that small green leaves develop at the end of the upper stems. Normally, however, this is not the case with sprouts (in contrast to microgreens, which, as the name suggests, develop green leaves in the next stage of development).

Sprouts are young vegetables that are grown in your own home in specially designed Sprout jars/ sprouting jars or on Cress sieves grow up. They are not intended to be grown in the garden. Accordingly, they are also a special, germinating (Organic) seeds only for sprouts (and microgreens).

Isn't it an absolute miracle that a tiny seed already carries all the information to become a complete, living young plant before it is even brought to life by soaking? No one can fool the seed, it unfolds all by itself if the accompanying circumstances are right.

"The seeds of the past are the fruits of the future!"

All you need from the outside is clean water, sunlight (= a bright location) and a suitable sprout jar - you don't need soil or fertiliser for sprout cultivation.

We have dedicated an article to sprout cultivation Extra article where you can find detailed instructions on how to grow sprouts.

The best thing about the little sprouting bundles of energy is that you can grow them all year round in your own four walls. Now you can find out why this is not the worst thing for your health ;).

Are sprouts the healthiest, freshest and at the same time (as seeds) longest-lasting food there is?

Without wanting to exaggerate, we have no choice but to say DEFINITELY YES!

The small sprout seeds, be it chickpeas, quinoa seeds, a mix of sprouts, etc., can be kept for months and do not take up much space in your kitchen as seeds.

And there should also be a place in your home for the power vegetables in a sprout jar?

Everyone can grow the seedlings all year round on the windowsill or in any bright place in the home. This means you can eat fresh, living vegetables full of vitamins, minerals and secondary plant substances even in winter. And they are regional, plastic-free, without any transport, industrial processing, sprays or preservatives.

So a hobby gardener doesn't have to wait until the next spring to plant, harvest and experiment with the crop on the plate again 😉

The special thing about sprouts is that they usually develop twice as many minerals, nutrients, enzymes and fibre as their regular vegetable sisters and brothers from the supermarket due to germination and a lively metabolic activity - and that with low calories. Sprouting is also responsible for converting carbohydrates and proteins in a way that is easy and more digestible for humans. Carbohydrates that are difficult to digest are converted to simple sugars in the process.

Sprouts grow directly from the windowsill onto your plate - what vegetable from the supermarket can keep up with so much vital energy, freshness and green power? In no other phase of a plant's development does it have so much bursting vitality as when it is a sprout!

Did you know that sprouts are one of the oldest foods in the world?

They were mentioned for the first time 5,000 years ago in the medical book of the Chinese emperor Sheng Nung Pen Tsao. He was a scholar of botany and considered sprouts to be one of the remedies. Special mention was made of soybeans. Their cleansing effect was supposed to help relieve cramps, clear the skin and improve digestive problems.

Then,500 years ago, it was bean sprouts again that featured in Li Shin Chen's 52 volumes of Chinese medicine. Black soybean sprouts are highlighted in it as an anti-inflammatory and laxative.

200 years ago in 1767, the English doctor David MacBride discovered germinating grain while searching for a remedy against the seafarer's disease scurvy. He dried and ground it into a powder. This had the same positive effect as fresh fruit and vegetables on the disease, which is due to vitamin C deficiency.

Subsequent ship excursions, including those around the navigator James Cook, always had cress on board. The seeds were germinated on linen cloths and kept moist with rainwater.

While British soldiers stationed in South Africa during World War I died by the dozen, Indian soldiers survived scurvy because of an oat, bean and lentil sprout drink.

The British army doctor H.W. Wiltshire, who experimented on his own, was also able to prove during the First World War that scurvy could be cured with the help of bean sprouts.

*Source: The Big Book of Sprouts and Germs, Rose-Marie Nöcker

The usual "sprout suspects" that you have probably noticed when shopping in the supermarket or health food shop are probably mung beans, radishes, broccoli, alfalfa, adzuki beans or even a sprout mix of 2-3 sprout varieties of these just mentioned.

What they have in common is that they are very low-maintenance and easy to grow and germinate, and their yield is lush and as big as possible.

Sprouts can be grown from:

The only food plants that are NOT suitable for growing sprouts are nightshade plants such as tomatoes, peppers, aubergines, chillies or even potatoes. They contain a lot of the toxic alkaloid solanine, which is considered a protection against predators and makes the sprouts inedible.

Sprouts are eaten whole, i.e. with their roots, the remaining seed coats, stems and sometimes also the small leaves that have already emerged (depending on the variety and germination period).

Sprouted vegetables can be eaten raw or blanched/steamed. Preferably, sprouts should be eaten raw, because healthy nutrients and vital substances are lost when sprout seedlings are heated.

Which sprouts should not be eaten raw?

Just as there is an exception to every rule, this is also the case with our sprouts.

Specifically, these are sprouted vegetables from legumes. The shells of pea sprouts, chickpea sprouts, adzuki bean sprouts and lentil sprouts still contain toxins and plant poisons such as phytic acid, protease inhibitors or haemagglutinins. These cannot be completely broken down even during germination. You should therefore NOT consume them in their raw state.

The solution: You can blanch the above-mentioned varieties briefly in boiling water, even if some of the heat-sensitive minerals are lost. Pea sprouts, adzuki bean sprouts and lentil sprouts should be boiled for at least 5 minutes and chickpea sprouts for at least 10-15 minutes (until they are soft and firm to the bite).

Mung bean sprouts can be eaten raw. However, many prefer them blanched very briefly in hot water. Feel free to try out which version you prefer!

Sprouted vegetables are excellent as an ingredient in a salad, in a Buddha Bowl or as a topping on soups. But they are just as good sprinkled over pasta or pizzas , served as a side dish to hearty meals, eaten plain on bread or in herb curd or together with other fresh vegetables. As a contrasting eye-catcher and special icing on the cake, the sprouts make an extravagant version on a fruit platter.

With the sprout babies you can creatively decorate birthday or festive treats. There are no limits to your inventiveness. For example, how about an exotic combination of strawberries and radish greens?

Do you feel like growing your own superfood at home? 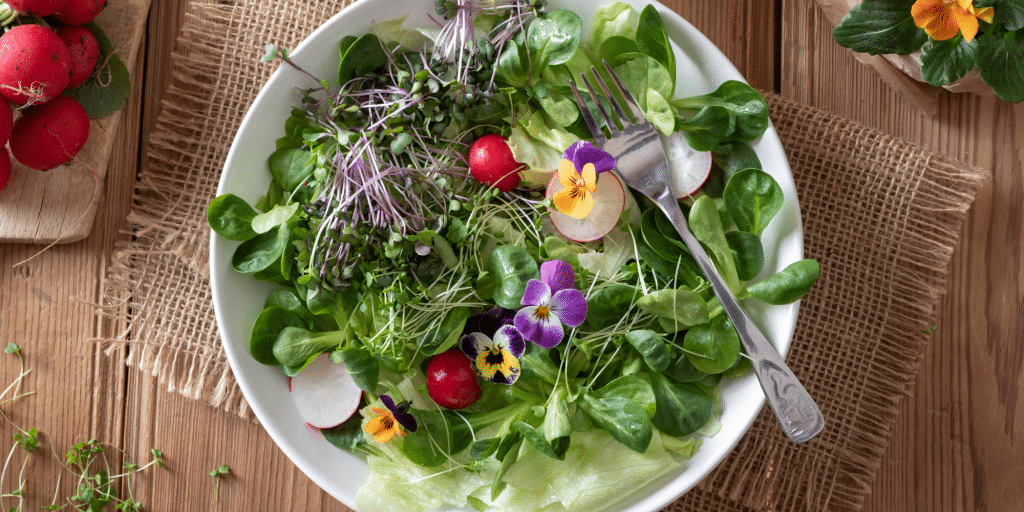 Superfood for the warm season

The last snow seems to have finally melted and the first warm sunny days provide the long-awaited vitamin D boost. For many, it is now time to go out into the garden, 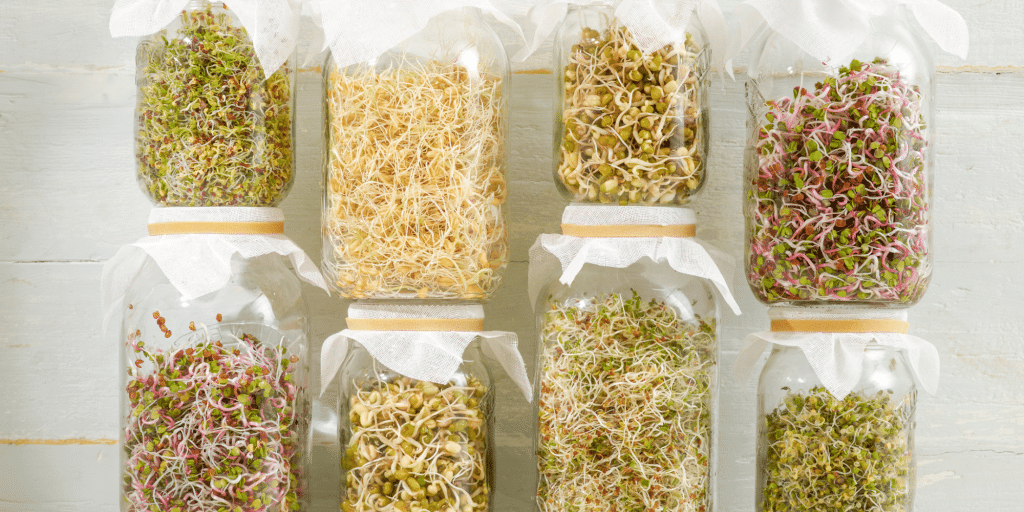 Guest article by Beate Caglar (Mindful Nutrition) What is the myth about detox? Again and again we read that the body does not need any help in detoxification. Rather, it is 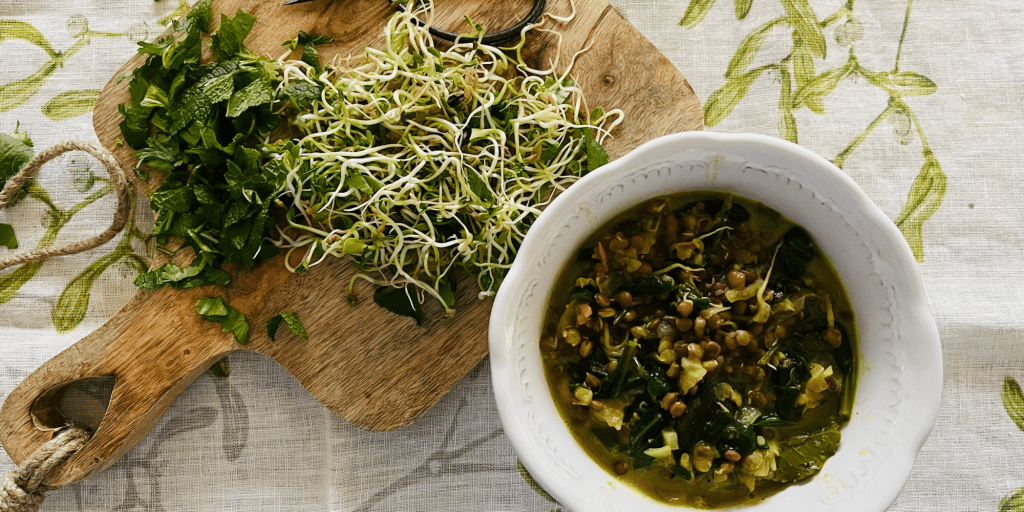